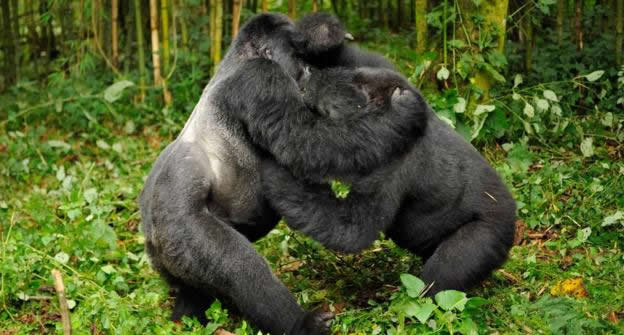 Are you a fresh traveler to Africa reading this article? It is talking about mountain gorilla trekking safaris in Uganda and Rwanda but as far as that statement are we on the same page or not, if not do you know mountain gorillas or you just hear of it.

Therefore, describing mountain gorillas are a unique species found only in the African continent, they are shy endangered ground dwelling herbivorous apes which usually feed on young bamboo shoot, stem, foliage, tree leaves and some fruits which include mangoes, oranges, grapes and more, mountain gorillas are tailless, black in color and smaller when compared with the lowland gorillas.

These gorillas usually live in a group comprising of male and female members being led by a dominant male silver back which is responsible for protecting its group members, looking for what to eat, construction of temporary huts for shelter and more.

Meeting these gorillas with your real eyes is an everlasting memory you will keep on reversing after your vacation in Africa. Highlighting on mountain gorilla trekking safaris, it involves moving in a group heading into the jungle in search of these shy endangered mountain gorillas but this activity requires you to buy a permit which issues you permission and the prices vary according to the country where you are trek the gorillas.

For mountain gorilla trekking safaris in the eastern part of the African continent the only places to go include Uganda and Rwanda with three major national parks where these apes are habituated.

Uganda “The Pearl of Africa” is ranked to be hosting the most part of the World’s remaining gorilla population with two major national parks where these shy endangered ground dwelling apes are found, these national parks include Bwindi Impenetrable Forest National Park and Mgahinga Gorilla National Park.

Both parks are located in the South Western part of Uganda nearing each other with Mgahinga Gorilla National Park being inclusive of the Virunga Massif, they are characterized with tropical rain forests, bamboo forests and swampy areas.

Trekking gorillas in Uganda requires you to buy a permit such that you are issued with permission for the activity and this permit costs $700 USD per person.

After the gorilla trekking activity either in Bwindi Impenetrable Forest National Park or Mgahinga Gorilla National Park a Certificate is awarded at the park offices for recognition.

Rwanda “The Land of a thousand hills” is another place to go for mountain gorilla trekking in the Eastern part of the African Continent, Rwanda is bordering Uganda in the North, Tanzania in the East, Democratic Republic of Congo in the West and Burundi in the South, it has only one national park where these shy endangered mountain gorillas are found named Volcanoes National Park.

This park is located in the North Western part of Rwanda bordering Virunga National Park of Democratic Republic of Congo and Mgahinga Gorilla National Park, Uganda, it is popularly known for the shy endangered mountain gorillas although it is found with other primates which include Golden Monkeys, Black and White Colobus Monkeys, Vervets, Baboons and more.

For the gorilla trekking in Rwanda, you are required to buy a permit for this activity which costs $1500 USD per person which seems to be expensive when compared with Uganda.

As usual for gorilla trekking safaris do not forget to bring yourself strong impenetrable hiking shoes since most of the trails are slippy characterized with mud, thorns and hooks, other things to pack include insect repellents, sun glasses, capes, long sleeved shirts and trouser, plus Water proof jackets and bags to protect yourself from biting insects like tsetse flies, Sun shine, thorn scratches and rain fall water respectively.